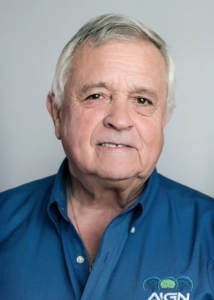 Brief Work History:
After starting his career, Juan Enrique was awarded a scholarship in the Chilean California Program at UC Davis University where he visited growers with farm advisors. Upon returning to Chile, he started working on his family ranch, where he was in charge of 1,000 acres of fruit production. When the intellectual property law was dictated in Chile, with the support of American friends that he made in the scholarship program, he started visiting California breeders, becoming the Chilean representative for Bradford’s Farm Program. Later, he became the representative of Zaiger Genetics. When he joined AIGN, he became the Pink Lady® Master Licensee for Chile. In partnership with his father, Alfredo Concha Yrravazabal, they founded Viveros Requinoa and started selling the varieties via their representatives.

In 1979, they designed and built their first packing house and cold storage, in 2001 they built their second packing and cold storage facility, about 20 miles away from their family ranch. They gave grown their business with the purchase of additional ranches, which now includes 3,700 acres of land with fruit trees.

In 2000, they purchased the fruit export company, C&D International. With that purchase, Juan Enrique leads as President C&D, Confrex SpA (family fruit operation and other business), Los Nobles, The Santa’s (his own family business), as well as Viveros Requinoa after the passing of his father. In the field of trade association, he’s the counselor of the National Society of Agriculture and also counselor Fedefruta (Chilean Federation of Fruit Growers), elected by vote of its members. In C&D they have one director member of the ASOEX (Chilean National Association of Fruit Exporters).