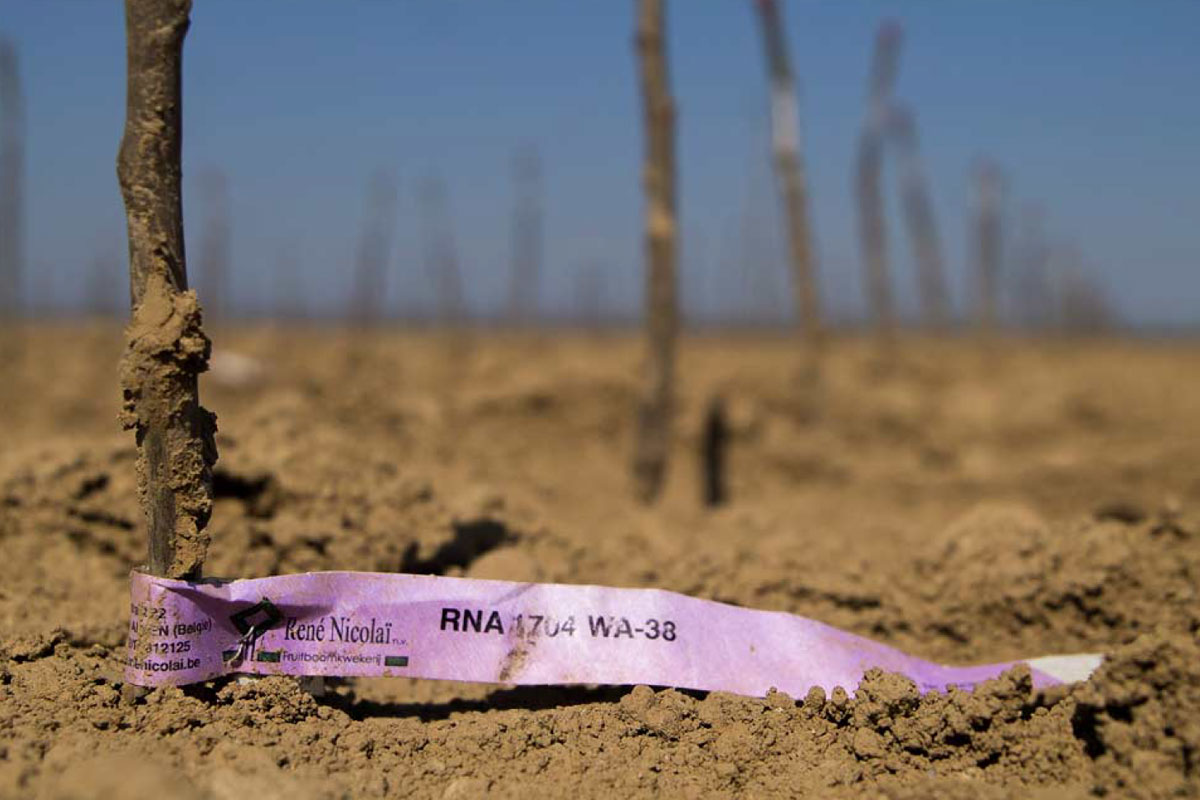 Among the many challenges with rolling out a new, managed variety is the ability to control and protect the intellectual property of the variety itself, ensuring royalties are duly paid and only those with licenses grow, pack and sell the fruit.

Gone are the days when growers shared budwood across property lines or started their own trees from budwood in their own orchards to expand acreage.

Today, nurseries and variety managers are using high-tech methods to track trees, production and sales from initial plantings through full-scale production years later — often with just a few clicks on a computer.

Washington growers have the exclusive right in North America, for at least 10 years, to grow, pack and market WA 38, which will be marketed and sold under the trademark Cosmic Crisp.

Any Washington grower can get a license to grow Cosmic Crisp, but he or she must abide by strict rules to plant and propagate it.

For growers who participate in a “club” variety or grow managed varieties, this is nothing new. But for those who have only grown open varieties, the requirements mark a change from normal practices.

The Yakima, Washington-based company has been contracted by Washington State University to globally manage commercialization of WA 38.

Growers in Washington have been dealing with managed varieties for nearly two decades, since ENZA introduced the Plant and Food Research-bred varieties from New Zealand.

They required a change in thinking for most growers. The company’s intent was to manage the entire process, from the number of trees in the ground to the fruit to the market, to avoid overproduction.

The other thing that’s different: the ability to manage the quality and consistency of the product, said Rick Derrey, who manages ENZA’s new variety programs in the United States. “That’s probably even a bigger part of this,” he said. “If you have a consistent quality product that you’re delivering to the retailer and the customer, you have a much higher chance for success.”

ENZA works hard globally to protect the intellectual property of its varieties, with a select number of nurseries and growers and just three sales agents to sell the varieties. The company tracks plantings, acreages, densities and rootstocks through a GIS mapping system. Formulas help to predict future production by orchard, by variety and by region.

As a program, Derrey said ENZA likely provides a lot more information to growers than they would have gotten with any other variety, with grower meetings at least twice a year, up-to-date information on the status of the market and, at season’s end, a grower ranking list based on everything from number of bins harvested, packout and fruit size to production per acre, return per bin and return per acre.

The top 50 names are published; the bottom 50 are not. “Our hope is those in the bottom will reach out to those growers who are successful to ask what they’re doing,” he said.

Communication and consistency are key, he said.

The only major high-tech tool the company is using for tracking is GIS mapping, no drones or bar codes on trees. But a franchise agreement with growers spells out clearly the expectations, nursery, licensed providers, packers, grade standards and parcel information, among other things.

Some companies are using drones to track their trees, and at least one breeder of ornamental trees for cities uses chips to track them, according to Dominique Thevenon, executive secretary of the Associated International Group of Nurseries or AIGN, an international group of nurseries, created by Brandt, to aid in the introduction and distribution of new varieties and rootstocks globally.

Normally, intellectual property is linked to vegetal material, but when it comes to globalization of varieties, there is much more involvement on the marketing side, Thevenon said — the protection of vegetal material and the product itself, to really give a higher premium value to the varieties.

“Cosmic Crisp is a perfect example,” she said. “The value of the variety (WA-38) is in the trademark and the commercialization strategies supporting it.
Similar to Pink Lady.”

PVM isn’t requiring anyone to bar code Cosmic Crisp trees either, but there is a unique code assigned to each grower contract.

The company already uses a computer software program, called Hertha and developed more than a decade ago, to evaluate new varieties that are not yet commercialized.

The program tracks everyone involved in that variety globally, such as breeders and managers, trademarks and patents, and includes the latest evaluations of the trees and resulting fruit.

PVM has since launched a new program called Idyia, to track the sale of trees and production from trees around the world and royalties once a variety has been commercialized.

Nurseries, growers, packers and marketers involved with Cosmic Crisp will have access to parts of the system that apply to them, as well as to industrywide reports on production.

“The goal is to make PVM as benefcial to the industry as possible by giving them as much information as possible, without compromising anyone’s confdential information,” Brandt said.

In May, René Nicolaï fruit tree nursery in Sint-Truiden, Belgium, planted the first Cosmic Crisp trees internationally as stock trees that will be used for eventual planting in Tyrol, Italy, by two fruit companies there that have been licensed to grow and sell WA 38.

Breeders have six years from the first commercial sale offering of a new variety to apply for plant breeder’s rights under international trees.

In the case of Cosmic Crisp, that clock started in June 2014, when the university held a drawing among Washington growers to decide who would get the first limited wood for 2017 plantings. The first trees were planted earlier this year.

Florent Geerdens, the René Nicolaï owner whose nursery is also an AIGN member, said the system allows for a unique “double control” to keep everyone honest.

“All the people involved in the concept must be trustful partners. We are our own police,” he said. “If my colleague is producing Cosmic without a license, I have to say you can’t do it. And if the partners we’re working with are not trustful, the system doesn’t work.”

The new technologies, both in cultivar development and in streamlining and sharing information across stakeholders, make for an exciting time in the tree fruit industry, Brandt said.

“The changes and the acceptance of IP by the industry as a whole, and new abilities through social media, computers, all of those things are coming together to make a unique opportunity and a unique environment for this to really explode,” he said.